The City of Temecula offers the following information in order to help you know what to do, what not to do, and who to call, in order to reduce the chances of becoming involved in a stinging accident.
Bee Basics
Africanized Honey Bees look just like the European Honey Bees we've always seen visiting the flowers in our gardens. They function and behave similarly, too, but the Africanized Honey Bee is much more protective of its home.

Just like the European Honey Bee, each Africanized Honey Bee can only sting once and then it dies. Also, the venom in either the single sting isn't a problem unless the victim is allergic. The difference is that Africanized Honey Bees are more easily disturbed and respond more quickly, stinging in greater numbers, and taking more time to calm down. 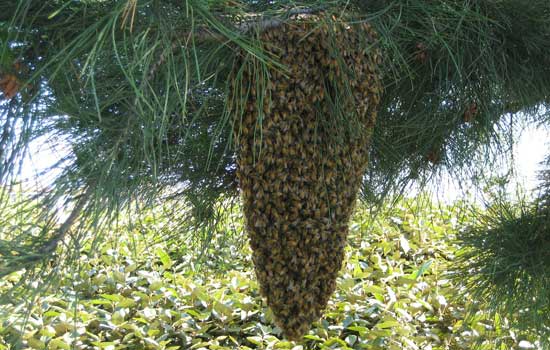 Like European Honey Bees, Africanized Honey Bees forage water, pollen and nectar wherever they can find it and will visit our gardens to do so. They are not likely to attack unless they are disturbed. Left alone, they will pollinate your flowers and then return to their nests without any problems.

Swarming
Also like the European Honey Bees, Africanized Honey Bees Swarm. This simply means that a colony has become overcrowded and it's time for the bees to leave. They take off together in a group, called a "swarm," in order to establish a new home.

While a large mass of bees, buzzing through the air may seem threatening, it's not interested in attacking anyone; its only purpose is to establish a new home. A swarm will often find a place to rest, in a branch of a tree or other comfortable spot, for a day or two, and then it will usually move on.

If the swarm is left alone, it is not especially dangerous, but do not attempt to move or destroy it yourself and, if possible, stay out of the immediate area. You may need to close your windows and stay inside. If avoiding the area is impossible, you may wish to contact a professional to remove the bees, even before giving them a chance to move on by themselves.

Bees Indoors
If bees come indoors, turn out the lights so that the bees will be attracted to the windows. If possible, open a window or door closest to them to let them out.

If The Swarm Stays
If the swarm does not move on after 2-3 days, but stays and begins to build a nest, it is best to have it removed or exterminated by a licensed bee removal service or exterminator as soon as possible. The larger the nest, the more difficult it can become to remove and will be more costly to do so. Also, as their nest grows larger, the bees become more defensive and more likely to swarm if they feel threatened.

If you have a nest that has existed on your property for quite a while, but are concerned because they have not been a problem, plan to have it removed as soon as you can.

An existing nest of European Honey Bees can be taken over by Africanized Honey Bees without your knowledge and can suddenly attack with minimal provocation. An existing nest can also attract more bees to the area.
Removal
Again, do not attempt to remove any nest of bees yourself; have a professional bee removal company remove it. Look for a company that will remove or exterminate bees in the Yellow Pages under "Bee Removal Services" or "Pest Control Services."

Preventing Nests on Your Property
Africanized Honey Bees are less selective about their nesting site and are more likely to move in to unexpected places, often close to or in the ground. 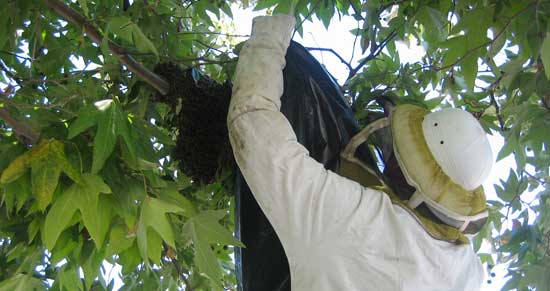 Be aware of potential sites in your yard and do what you can to reduce their appeal to swarming bees:
Please remember
Disturbing an established nest of bees can result in stinging accidents. If you attempt to remove a swarm or hive by yourself, you risk injury to yourself, your family, and possibly, your neighbors.

Ignoring a nest on your property can also be dangerous and pose a liability.
Back to TemeculaCA.gov
Emergency Services
Temecula Alert
Police & Fire Stations