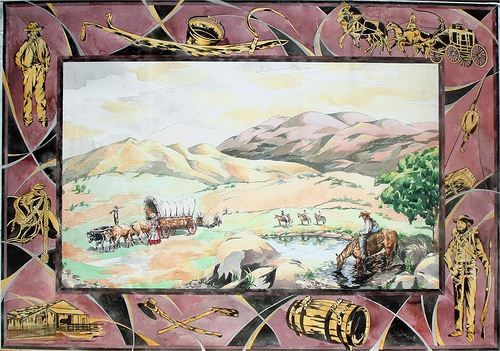 from artist Carole Choucair Oueijan.
The earliest trails across California were created by Native Americans centuries ago. In the 1700s and early 1800s, the Spanish explorers and missionaries followed the early trails as they were establishing the missions in California. Some of these trails would later become the basis for the Southern Emigrant Trail. Between about 1820 and 1846, a relatively small number of trappers, hunters, and explorers used some of these trails when they came across the country to California.

In January 1847 the Mormon Battalion was the first large group of people using this old trail to pass through Temecula. They began their historic march in Council Bluffs, Iowa in 1846 and crossed California from Yuma via Warner Springs into Temecula. The 335 Battalion members spent the night in Temecula before marching on to the San Diego. The 1848 discovery of gold in California brought a huge influx of travelers across the same trails and through Temecula on their way to the goldfields. Some of these travelers documented their travels in diaries or journals.

In September 1858, the famous Butterfield Overland Mail began carrying mail and a few passengers between St. Louis and San Francisco. The southern California portion of the route included Warner Springs, Temecula and Laguna (Lake Elsinore). The semi-weekly trips averaged 22-25 days each way and brought four stages a month through Temecula. Details of these trips were documented in journals and newspapers. The Butterfield Overland Mail was stopped in 1861 due to the Civil War. During the Civil War, military troops were stationed in California and used the old trails. Reports of military activities include mention of roads, towns, and people in the area.

The end of the era of the Southern Emigrant Trail began with the arrival of the railroad in southern California in the 1880s. Some of the old trails became the basis for modern-day roads, such as Highway 79 South.

Although a few of the locations along the Southern Emigrant Trail in Riverside County have been known for years, the location of much of the trail was uncertain until recently when this project began. A wide variety of resources were used to document the location of the trail. Surveyors’ field notes from 1850-1880 provided considerable information about the trails and various buildings as did the numerous diaries and journals of travelers during that period. Newspapers accounts, land grant records, deeds, topographic maps, early aerial photographs, as well as current photographs were just some of the additional information used in this project. The process involved two stages. The first was to identify “known” points by latitude and longitude when there was specific evidence to document points along the trail. The second part of the process was to determine where the trail went between those “known” points. Sometimes that was fairly easy to determine where the trail had been because of the terrain and the distance between the known points, but other times it was more of a “best-guess” approach.