Since its early beginning, the Temecula Valley has always been a place where the combination of mild climate and beautiful rolling hills have attracted human settlement.

The hillsides were the home of the Temecula Indians, the first residents of the area. Ancestors of the Temecula Indians were in this area as early as 900 A.D. The native people from here to the coast who shared the same language and culture became commonly known as the Luiseños, because many of their villages were once under the influence of Mission San Luis Rey.

The first known white man to set foot in this area was a Franciscan padre, Father Juan Norberto de Santiago, who trudged into the valley in October of 1797. Santiago was on an expedition out of Mission San Juan Capistrano seeking a site for a new mission. With his exploring party of seven soldiers, he trekked to the shore of what is now Lake Elsinore, then traveled southward through the Temecula Valley and on to the ocean. During his years in California, Juan Santiago logged much information regarding the Temecula Valley area. He established a rancho at Mission San Luis Rey, and in 1810 returned to Mexico.

Little is known about Temecula during the early 1800’s because so many records were destroyed in the fire that followed the great San Francisco earthquake in 1906.

In 1821, Jose Sanchez, a Franciscan priest, recorded that he had accompanied Mariano Payeras, prefect of the missions, on a visit to Temecula. It was during this period that the Pala Mission was built and Christianization of the native Indians was begun.

Thirty-four years after Juan Santiago had visited the village of Temecula, an adventurous party of American trappers rode into the valley. The year was 1831. Among the group were Ewing Young, Isaac Galbraith, and John Turner.

By the mid-1840’s it became apparent that Mexico’s hold on California could no longer be retained and governors of the province began the process of making land grants to individuals. In 1845 Rancho Temecula was granted to Felix Valdez.

The passing of the ranchos into private ownership brought the romantic era of rancheros and vaqueros, for which early California is best known, into full bloom. It was a short-lived era, but perhaps nowhere in California did its aura linger longer than in the Temecula Valley.

One of the most often told stories of Temecula’s early days is of the Massacre in a nearby canyon that took place in January, 1847. The canyon is just below the present site of the Vail Lake Dam and was the scene of the bloodiest battle of the Mexican War. Excited by the fighting taking place around them, the Temecula Indians decided to do a little warring on their own. They captured 11 Mexican soldiers whom they later executed at a place now known as Warner Springs. A Mexican contingency was soon dispatched to run them down and avenge the deaths.

The Temeculans, who were now on the run, went into the canyon hoping to ambush their pursuers. The tables were turned on them, by the Mexicans who enlisted the aid of the nearby Cahuilla Indians, who had been itching to settle the score with the Temeculans over some previous skirmishes between the two tribes.

The Mexicans, feigning weariness and illness, lured the Temeculans out of the canyon and into the hands of the Cahuillas who promptly slaughtered them. Several days later the dead Temeculans were buried in a common grave, the mound of which is still visible from Highway 79.

Temecula had its share of experiences with desperadoes. Early in 1857, Juan Flores, the leader of a gang of outlaws, killed a storekeeper in San Juan Capistrano and then again in Temecula. With the help of Manuelito Chapalac, he hid out near Santiago Peak where he and his remaining followers, who by that time had also killed the Los Angeles County Sheriff, were captured by posses from El Monte and San Diego. He later escaped, triggering the greatest manhunt ever conducted in California. Flores was finally recaptured in Simi Pass north of Los Angeles. On February 21, 1857, the Los Angeles jailer surrendered him to a mob and he was hanged on a street of the town.
As any history buff knows, stagecoaches were synonymous with holdups and sure enough a stage was held up and robbed near Temecula. The stage driver was slain when he refused to give up the strong box.

On the night of September 18, 1858, the first of the Butterfield Overland stagecoach line, which was to run between St. Louis and San Francisco, pulled up in front of the Magee Store. 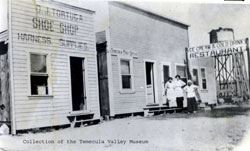 A previous stage line had started running between the trading post on Warner Ranch and Colton and the first stage to ever enter the Temecula Valley arrived from Warner Ranch on October 27, 1857. With the arrival of the stages also came the beginning of change in the Valley.

The stages brought new settlers to the area and mail became an important link with the rest of the country.

On April 22, 1859, the first inland Southern California post office was established in Temecula in the Magee Store.

This was the second post office in the state, the first being located in San Francisco. The Temecula post office was destined for a number of moves over the ensuing years; its present locations are the seventh and eighth sites it has occupied.

While the United States mail delivery in Temecula was being transformed from stagecoaches to military couriers and from saddle pouches to wagons, other phases of history were also transpiring. Born of discontent bred by the Civil War, in the late 1860’s, a great migration reached Temecula Valley. It was also during this period that the historic Mormon March, the longest military march in U.S. history, passed through Temecula on the way to San Diego.

In 1882, the Pechanga Indian Reservation of approximately 4,000 acres was formed by executive order and formally created some eight miles from downtown Temecula.

The Civil War put an end to the great Butterfield Overland Stage Service and transportation once again became a problem.

On January 23, 1882, a rail line from National City to Temecula was completed and the valley’s silence was broken by the whistle of a locomotive. Regular service was started between National City and Temecula two months later and local residents had good access to San Diego. A minor business boom began in Temecula with the advent of rail service and several new stores were built and started to garner trade. In 1883 the line was extended to San Bernardino. In the late 1880’s, a series of floods washed out the tracks and the railroad was finally abandoned. The old Temecula station wound up as a barn and was later demolished.
The stone age was revived in the 1890’s with the operation of granite stone quarries. Temecula granite was shaped into fence and hitching posts, curb stones, courthouse steps, and building blocks. Many of the fence posts and curb stones can still be seen in Temecula, Riverside, and San Francisco.

At the turn of the century Temecula gained a place of importance as a shipping point for grain and cattle. During this period the cowboys ruled the roost and the great cattle drives from the back country took place. Temecula had become a cow town. 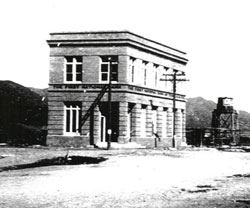 In 1904 Walter L. Vail, who had come to the United States with his parents from Nova Scotia, migrated to California and with various partners began buying vast acreages in Southern California. Vail was already a cattle rancher on a grand scale before he started buying ranch land in the Temecula Valley in 1905, buying large tracts beginning with 38,000 acres of Temecula and Pauba Ranchos, along with the northern half of the Little Temecula Ranch. Vail was run over and killed by a street car in Los Angeles in 1906; his son, Mahlon Vail, took over the family ranch.

In 1914, financed by Mahlon Vail and local ranchers, the First National Bank of Temecula opened on Front Street.

In 1915, the first paved, two-lane county road was built through Temecula.

Temecula had its share of excitement in the late 1920’s and 30’s. There were murders, a bank robbery, a flood, and visits by Hollywood celebrities. Prize fighters Jack Dempsey and Jack Sharkey worked out in a makeshift ring on the second floor of the old Welty building at Front and Main Streets over the Blind Pig Saloon and some moon-shining was conducted in the surrounding hills.

By 1947, the Vail Ranch contained just over 87,500 acres. For years the Vail family had dreamed of building a dam to catch the Temecula Creek water which ran its course to the Pacific Ocean. In 1948, at a cost of more than $1 million, the dam was completed and created Vail Lake.

Through the mid-1960's the economy of the Temecula Valley centered around the Vail Ranch; the cattle business and agriculture were the stimuli for most business ventures. During that period, the clientele of the Swing Inn, the Long Branch Saloon and the Stables Bar seemed to be confined to ranchers, cowboys, and Indians. While the Old West lifestyle continued here, the outside world was evolving dramatically.

On December 4, 1964, the Vail Ranch was sold to Kaiser Development Company and launched the transformation of the Temecula Valley. A later purchase by the group brought the total acreage to 97,500 a spread of land two and a half times the size of the city and county of San Francisco.

The last years of the 1960's and early 70's witnessed the beginnings of dramatic change in the Temecula Valley. Engineers, contractors, heavy-equipment operators and real estate agents quickly edged out the cowboys and Indians as the main customers at the local establishments. Pickup trucks towing horse trailers, trucks hauling cattle and tractors rigged with farm implements were replaced by cement mixers, lumber trucks and industrial grading equipment. Sales activity switched from cattle, hay and grain to subdivided real estate acreage.

The Kaiser Land Development Company marketed the valley's attractions actively. Soon, the area became known as Rancho California. Many land sales were accomplished by means of limited partnership syndications, which helped to spread awareness of the area.

One side effect of this high-profile development was a second tier real estate boom in land suitable for avocado groves and grape vineyards on the east side of the valley. The value of plantable land skyrocketed.

The late '70s brought changes to some of the original Old West sites. The Long Branch Saloon was converted into a meeting house, while the Stables Bar became the site for retail stores. Although the Swing Inn remains, new restaurants began to open.

The I-15 corridor between Los Angeles County and San Diego was completed in the early 1980's and the subdivision land boom began. When Rancho California incorporated in December, 1989, the citizens voted to officially name their city "Temecula".